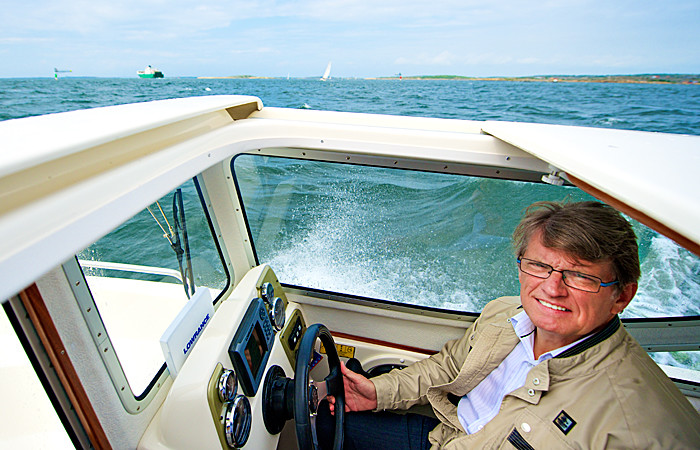 Thomas Ström started NTEX in 2003. In ten years he created a group of companies with over 300 employees, with offices in about ten countries and with a turnover of approximately 1 billion SEK.

Today, NTEX offers freight forwarding by road, air and sea and third-party logistics all over the world.

Thomas Ström was more or less born an entrepreneur. His father ran several companies in the transport industry. Early on, Thomas managed a filling station for boats in Långedrag, a part of Gothenburg. He started working at his father’s haulage company when he graduated from school. At that time the company mostly did freight forwarding by air.

He later worked as a transportation coordinator at ASG but he returned to the family business after a few years. By that time the business had begun its collaboration with Pickos budbilar and Åkarringen, two Swedish haulage companies. Thomas also had a small business on the side with a couple of trucks and courier’s vans.

Thomas studied to become an airline pilot in Stockholm/Nyköping in the mid 80’s and later moved to the US. He moved back to Sweden after a few years because of the high unemployment rate among pilots at that time.

This is why he returned to the transport and logistics business. He first worked at Van Dieren, continued to Kuehne & Nagel and ended up at Euroute, which was later bought by Norfolkline, owned by the gigantic AP Möller.

At the beginning of the new millennium he was again reminded of his entrepreneurial side. Thomas wanted to start and run a business in a way that differs from the large companies. In October of 2003 he handed in his resignation and started NTEX, one of Sweden’s largest private transport and logistics business.

The idea was to challenge the established market and to offer flexible solutions while always putting the customers’ needs first. Thomas says that when choosing NTEX one’s expectations should always be met.